Honō was among the few lucky survivors of a tiny village that was hoarded by thieves and burned to the ground. She was found in a sad state with most of her face burnt. It was hard to survive in a time when women were not taken seriously, moreover, one with a deformity. This did not affect her character, if anything, she only remained kind and yet fierce when necessary. Justice was imprinted in her heart.

One day, whilst she was scavenging for herbs and various fruits she heard a voice.

It continued. She followed it, feeling a strange comfort until she reached a clearing and met a beautiful magnificent nine tailed kitsune fox.

“This is your true calling.” the fox whispered, “You are the blaze in the hearts of all the abused, all the broken and all the hopeless.” She accepted this, taking on a different form.

Her name now haunts the lips of many fearful cold blooded abusers. “She appeared, in a mask adorned with flowers, beautiful, mysterious. She said if I didn’t treat the salves better she will set me on fire. Then disappeared…in flames…”

Tentacio Spirit of the Past Mask @ Neo Japan 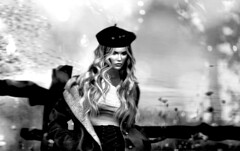