“Baila..baila…move it….shake it”  and she did with an all consuming passion that resided in her inner being.

Red is the color of fire, passion, desire and love and carries with it an energetic force that can awaken and excite and intensify your emotions to a fiery pitch.  I love the richness of the color and it’s a color that I wear well in real life, so I have quite a few things in my wardrobe.  It reminds me of the time when I interviewed for my last job as the executive director of a midsize organization and I wore a red business suit.  I had made the short list and was competing for the position against five men and I needed a power boost and a little extra strength and courage as I would be speaking in front of a panel of people.  I felt pretty confident and I got the job, so it paid off.

It’s a hit and miss with the color on some clothes in Second Life.   I particularly like this shade in this outfit that I enjoyed putting it together using pieces of the Miakaj set by Jinx currently at Fair Play.  It wasn’t until I took down the scene and was processing the picture that I realized that I somehow removed the choker top. There are a few other pieces that I mixed in with the Miakaj set and are noted in the details below.

This sexy hairdo that I am wearing is called Celina and is made by eXxEsS.  It is at the main store and there are two extensive colors huds to choose from. Check out the other hairs in the store… they all have a unique style.

The last items being featured is this old world furniture by unKindness. They were at an event that is now over, which I was not able to blog the items during that period. They can be found now at the main store. The patio bench comes in a pg and an adult version with a variety of poses.

“The greatest act of courage is to be & own all that you are.  Without apology. Without excuses & without any masks to cover the truth of who you truly are.” 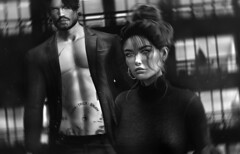